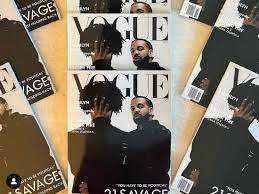 On the 4th of November, Drake and 21 Savage released a collaborative hip-hop album called “Her Loss”.[1] Before the release of this album, both rappers engaged in a satirical promotion of their album. These promotional spoofs included the following:

“Me and my brother on newsstands tomorrow!! Thanks @voguemagazine and Anna Wintour for the love and support on this historic moment.”[3]

However, the internet soon discovered that the three above-listed interviews and performances were not going to happen, and the entire promotional concept was to make a mockery of the traditional album rollout process. The duo had managed to conjure promotional clips using deep fakes and editing. This was further corroborated by the fact that Howard Stern[4] and NPR respectively confirmed that the interview and live performance was not real but expressed their desires to work with the duo.[5]

On the other hand, the Vogue feature seemed legitimate as it purportedly had the endorsement of Vogue’s renowned editor-chief, Anna Wintour, and fans were given the locations of newsstands in Toronto and across America where the magazine could be purchased. Posters of the duo on the Vogue cover were also plastered in various cities. This announcement was also republished by various news outlets such as Yahoo News.[6]

On the 31st of October, several copies of the magazine were handed out to members of the public across several cities in the United States.[7] Upon receipt of the magazines, people discovered that this was yet another stunt.[8] The magazine was reportedly filled with random photoshopped pictures, pictures of Anna-Wintour, exact replicas of pages from the October 2022 issue, and more promotional pictures of the duo.[9]

Although counsel representing Advance Publications (“Conde Nast”), the publishers of Vogue allegedly reached out to resolve the matter amicably and asked that the duo cease using its trademark, nothing was done by the duo or its public relations firm, Hiltzik Strategies.[10]

Based on the foregoing, Conde Nast has instituted a lawsuit against the rappers and their public relations firm before the US District Court for the Southern District.[11] The action is premised upon claims of trademark infringement/counterfeiting, false designation of origin/unfair competition, dilution, false advertising, a violation of the New York General Business Law, and common law trademark infringement.[12] The Plaintiff seeks various reliefs against the Defendants including a monetary relief of $4,000,000 or treble damages in connection to the profits made from the Album sales and magazines, and temporary injunctive reliefs.[13]

A temporary injunction has now been granted against the Defendants and they have been ordered to take down and remove from public display and circulation all references to the counterfeit magazine and cover as well as images of Anna Wintour or her likeness.[14]

This paper seeks to discuss the elements that Conde Nast must prove to establish the first claim, trademark infringement.

The principal legislation governing the regulation of trademarks in the United States is Lahman Act, also known as the Trademark Act, 15 U.S. § 1051 et seq. It defines a trademark as:

“Any word, name, symbol, or device, or any combination thereof- (1) used by a person, or (2) which a person has a bona fide intention to use in commerce and applies to register on the principal register established by this chapter, to identify and distinguish his or her goods, including a unique product, from those manufactured or sold by others and to indicate the source of the goods, even if that source is unknown.”

In this case, the trademark in issue is “VOGUE”. According to section 1114, to succeed in a trademark infringement claim, the Plaintiff must show that it has a valid trademark, the defendant used the mark, it was used in commerce or in connection with the sale or advertising of goods and services without the plaintiff’s authorization which caused a likelihood of confusion.[15]

Existence of a valid trademark

Conde Nast must prove that it owns the “VOGUE” trademark. Notably, the plaintiff can institute an action for trademark infringement without registration.[16] In that instance, the plaintiff must show ownership and validity of the trademark.[17]

Although registration of a trademark is not required, it has its advantages. For instance, it gives the trademark owner national protection and is constructive notice to others that the mark is registered.[18] In court, it serves as prima facie evidence of the trademark’s ownership, validity, and the plaintiff’s exclusive right to use the trademark for goods and/or services in its registered class.[19] Furthermore, if the trademark owner files an affidavit of continuous use, the trademark becomes incontestable after five years. However, the defendant can still challenge the trademark’s validity on the grounds of abandonment, misrepresentation, or fraud.

In the instant case, a search of the USPTO Trademark Electronic Search System revealed that the plaintiff has several Vogue trademarks registered in various classes, specifically trademark registration number 0125542 is a wordmark registered in class 38 for magazines. The Court is likely to take this as prima facie evidence of ownership. [20]

Statutes provide that the impugned trademark must be used in commerce before an infringement claim can be established.[21] To satisfy this requirement, the Plaintiff must show that the infringing activities have a substantial impact on interstate commerce.[22] Some of the activities that fall into this category include:

As stated above, the offending magazines and posters were distributed and plastered on the internet and across various cities in the United States. Therefore, it is likely that the Plaintiff will be able to satisfy this requirement.

A multi-factor test was established in the case of AMF Inc. v. Sleekcraft Boats, 599 F.2d 341, 348-349 (9th Cir. 1979). The court considers the strength of the mark, proximity of goods, similarity of marks, evidence of actual confusion, marketing channels used, type of goods and the degree of care likely to be exercised by the purchaser, defendant’s intent in selecting the mark, the likelihood of expansion of the product lines.[24] These factors are neither exhaustive nor rigid and some have been discussed below:

Strength of the mark

The Plaintiff will likely be able to establish that there was some likelihood of confusion. For a mark to be considered strong, it must have acquired secondary meaning or be fanciful, suggestive, or arbitrary. The “VOGUE” trademark has acquired a secondary meaning and is an internationally renowned magazine, synonymous with fashion. Its earliest trademark was registered in 1908 and due to its continuous use, it has developed significant goodwill.

The similarity of goods, trademarks and marketing channels used

The trademark used on the posters and magazines was identical to the “VOGUE” trademark. Verified Twitter accounts such as @drakerelated (an account with a clear affiliation with the rapper) tweeted an image of impugned cover alongside authentic issues of Vogue and Harper’s Bazaar. It can be argued that this gave a greater illusion of authenticity to the public.

Furthermore, the information was republished by several news outlets such as Yahoo News and Hot New Hip Hop, the latter claiming that the artistes had made history. A review of the comments section of both artistes’ posts also showed the public’s enthusiasm to secure copies of the magazines as well as general celebratory comments.

Therefore, it is likely the court will find similarities between the magazines and the trademarks. In terms of the marketing channels used, the posters and magazines were circulated across social media platforms and densely populated cities such as Atlanta, New York, Toronto, and Miami. The Plaintiff also posts its latest issues on its social media pages and sells its magazines at newspaper stands. The Court may find that the distribution channels are sufficiently similar, and consumers may be exposed to potential confusion

Degree of care exercised by the consumer

The courts have held that the more expensive an item is or the more sophisticated a buyer is, the more cautious and prudent the customer is likely to be.[25] Therefore, they are less likely to be confused by the infringing mark. From the magazine’s website, a yearly subscription for the print and digital versions is $24.99.[26] This means that a print version at the newsstands is significantly cheaper. It is also important to note that the impugned cover is a reproduction of the original Vogue magazine but with pictorial modifications. Therefore, increasingly increasing the likelihood of confusion.

This considers whether the Defendant’s actions were malicious and intended to deceive and confuse consumers.[27] Put differently if the Defendant acted in bad faith. Although the trademark was used only used for the promotion of their album, the court may find that the Instagram post thanking Anna Wintour and the Defendants’ alleged unwillingness to take the post down or settle amicably shows that they acted in bad faith and wanted to capitalize on the press from various media outlets and the goodwill of this popular fashion magazine. Moreover, it is well-known that Vogue is very selective of who graces its covers, therefore, being on the front page is a very huge feat.

Expansion of product lines is only a relevant consideration when parties are selling different products.[28] The court considers the possibility of the trademark owner expanding into the defendant’s line of business. This is irrelevant here as the Defendants used the trademark on magazines and posters.[29]

Therefore, it is likely that the Plaintiff will be able to successfully establish a claim for trademark infringement. It is important to state that despite the magazine itself especially the replicated images from authentic vogue issues, being a possible ground for copyright infringement, there was no mention of it in the reliefs sought. As illustrated in Fourth Estate Pub. Benefit Corp. v. Wall-Street.com, LLC, there must be a valid copyright registration before an action is instituted for copyright infringement.[30] The complaint states that the plaintiff is in the process of registering the copyright and will subsequently amend its complaint.[31]

[1] Blecher, Tali. “Let’s do it forreal: The ip implications of a fake press tour”, (10 November 2022), online: By George Legal <https://www.bygeorgelegal.com.au/blog/lets-do-it-forreal-the-ip-implications-of-a-fake-press-tour/>

[30] Wong, Eric D. “What a Copyright Registration Can Tell You about Your Next Infringement Case”, online: Americanbarorg<https://www.americanbar.org/groups/litigation/committees/intellectual-property/practice/2021/copyright-registration-infringement-cases/>