Thank you to Allan Switzer for the image 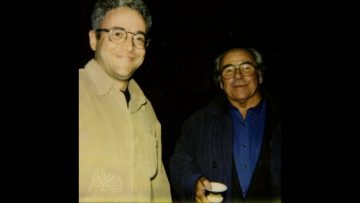 Allan Switzer, a multi-disciplinary Vancouver artist, is the creator of the art on the front page of this website. Allan also took the photograph his piece that is the basis of the image reproduced on this website. The work, created in 2016, is called “Mood Elevator” and is 40″x 40″ acrylic on linen. Allan created the patterns in his mind and then brought  them  into play on his computer. Using masking tape he then translated the pattern onto heavily gessoed linen. He then build the layers up by juxtaposing color strategies which he arranged in a way that is not fluid but subject to each viewers sensibility.

Allan studied Philosophy at Toronto’s York University and obtained a Bachelor of Fine Arts from Vancouver’s Emily Carr Institute of Art and Design. He also holds a Masters degree in Fine Art from Montreal’s Concordia University.

Allan Switzer was born in Calgary in 1955. He is not only a product of Vancouver sensibilities and a philosophy degree from York University, but also a by-product of the second generation Conceptualists’ of the Nova Scotia College of Art and Design, who made up a large part of the ECIAD faculty during his time at school.

The work he began in graduate school was a kind of pathology. Allan began sifting through the remains of the recently departed-(Modernism). Utilizing the grid as an organizing structure with an aura of film and photography in respect to models of subjectivity. These works suggested a taxonomy of photography in a modernist field, where both the photographs and the modernism are, in different ways, corrupted.

Allan utilizes the motifs of abstraction, minimalist grids, stripes and images, and fonts and these works can be read as complex systems of reference, effecting a collision of signs and elements of disparate painterly discourse. The specific interrelationships of these appropriated parts leave meaning residing not in some essence or identity but precisely in the interplay of the various elements.

In his most recent works, Switzer is influenced by Molinari’s colour study and patterns by Bridget Riley. Switzer creates an experience of “pure phenomena” when the viewers interact with his visually (over) stimulating works. The use of text within his work continues to appear discreetly in various forms as an exploration of visual language. Most of Switzer’s texts reference 1970’s rock lyrics and can be seen within the various stylized patterns of his paintings.

As you can see Allan Switzer’s art both evokes and incorporates overt and hidden references to other artistic works and other creators. This makes Allan’s work a particularly fitting meta-statement on the intersecting mysteries of both art and IP Law.
Thank you Allan for your kindness, generosity, and friendship.
Jon
P.S. The Polaroid on this page is of a much younger Allan Switzer with famed French sociologist and notable post-structuralist, Jean Baudrillard.