Jon Festinger, Q.C. (LL.B., B.C.L. 1980 McGill University) is a Vancouver, British Columbia based counsel and educator. He is an SFU Professor of Professional Practice and a faculty member of the Centre for Digital Media (http://thecdm.ca), as well as Honorary Industry Professor in the Centre for Commercial Law Studies, Queen Mary University of London (http://www.law.qmul.ac.uk/people). Jon has taught media, entertainment and communications law topics at the law school at UBC, now known as the Allard School of Law, for over two decades, as well as teaching at various times at the UBC Graduate School of Journalism, the Thompson Rivers University Faculty of Law, and the University of Victoria Faculty of Law.

He is the author of the first edition of “Video Game Law” published by LexisNexis in 2005, co-author of the 2nd Edition published in 2012 (http://www.lexisnexis.com/store/ca/catalog/booktemplate/productdetail.jsp?prodId=prd-cad-01004), and  Co-Editor (with Professor Gaetano Dimita and Dr. Marc Mimler) of the Interactive Entertainment Law Review (Edward Elgar Publishing  https://www.e-elgar.com/ielr). Jon was “Guest Editor” and author of “Introductory Essay: Digital Media, Video Games, and the Law” a special issue of the University of British Columbia Law Review at (2013) 46:3 UBC L Rev 615, and the author of “Mapping the Electronic Highway: A Survey of Domestic and International Law Issues” at (1995) 29:2 UBC L Rev 199.

A graduate of McGill University’s Faculty of Law, Jon began his legal career in private practice, in turn becoming General Counsel and Corporate Secretary of WIC Western International Communications and its subsidiaries including Canadian Satellite Communications Inc. (“Cancom”), Senior Vice President of the CTV Television Network and Executive Vice President, Business & General Counsel of the Vancouver Canucks. Jon practices law through Whiteboard Law  and is Media & Copyright Counsel to Broadband TV. He is Chair of the Board of viasport B.C., a Trustee of the BC Sports Hall of Fame, Vice Chair of the Board of The IBD Centre of BC, a member of the Law Society of British Columbia’s Rule of Law & Lawyer Independence Advisory Committee,  and an Advisory Board Member of the Global Reporting Centre. Jon has been a Trustee of the Simon Fraser University Foundation, Chair of the Board of Ronald McDonald House British Columbia, a Director of City Opera Vancouver, a Director of the eatART Foundation, a Trustee of the Jack Webster Foundation, a Director of the CKNW Orphans Fund, a Director of the Vancouver Board of Trade, a Director of the British Columbia Association of Broadcasters, a Director of Canadian Women in Communications (national), Chair of the Canadian Bar Association Media & Communications Law Section (national), a member of the “Working Group on Canadian Programming and Private Television convened by the Minister of Canadian Heritage in 1994 and which authored “The Future of Canadian Programming and the Role of Private Television: Keeping Canada on the Information Highway”, and a Director of the McGill Legal Aid Clinic in 1979 and 1980. 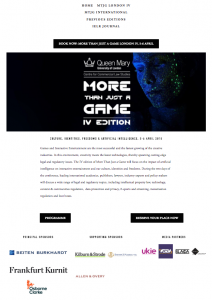 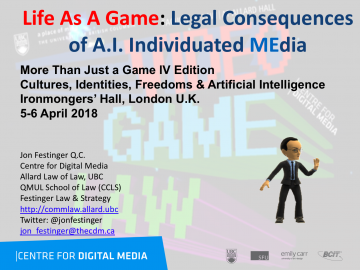 2. Third Edition of “More Than Just A Game: Games and Interactive Entertainment Law International Conference”,  The Centre for Commercial Law Studies, The School of Law, Queen Mary University of London, April 6, 2017 at Stationers Hall, London U.K.; Presentation on “Trusting Ourselves: Freedom of Thought in Virtual Realities.” 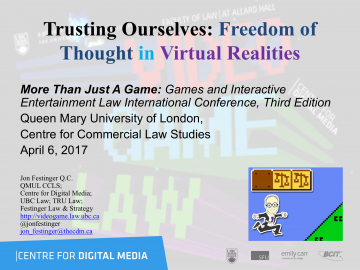 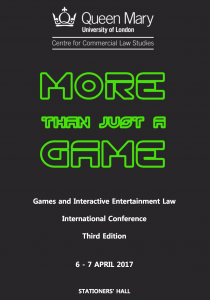 3. Second Edition of “More Than Just A Game: Interactive Entertainment & Intellectual Property Law” at The Centre for Commercial Law Studies, The School of Law, Queen Mary University of London, April 8, 2016; Presentation on “Legal Contradictions in Video Game Worlds: Copyright through the Post-Structuralist Looking Glass.” Draft iteration presented at a Faculty Seminar at the Allard School of Law, UBC on March 16, 2016. 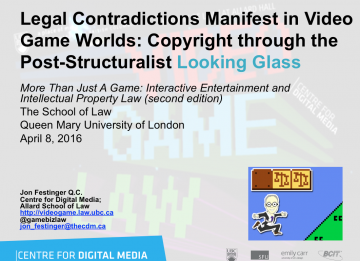 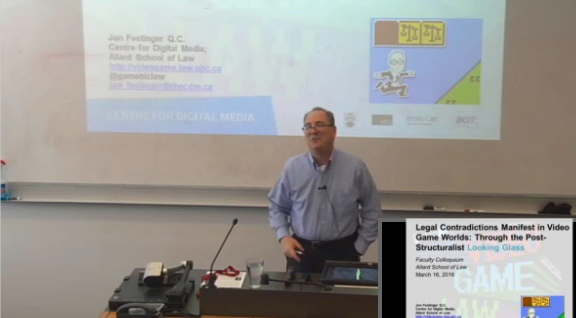 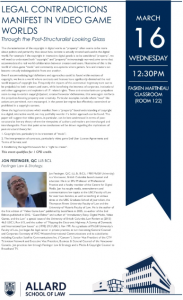 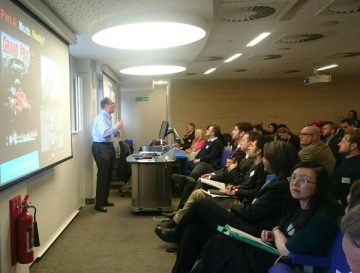 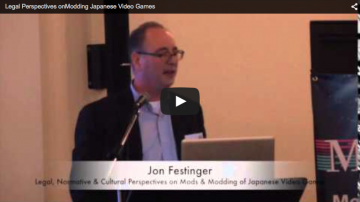 6. “Relevance for Creative Digitization & the Internet” at the “Roundtable on the Diversity of Cultural Expressions – Impacts and Implications of the UNESCO Convention Ten Years After and Ten Years Ahead: The View From BC”, Simon Fraser University, February 25, 2014 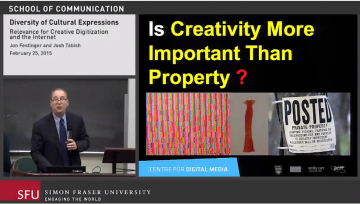 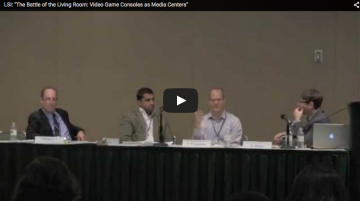 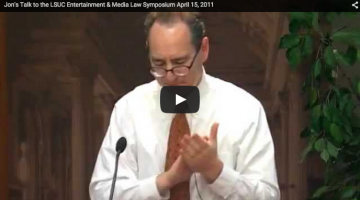 1. Under the rubric of “gratuitous advice is worth what you pay for it” is a profile of me by the Allard School of Law’s Centre for Business Law… 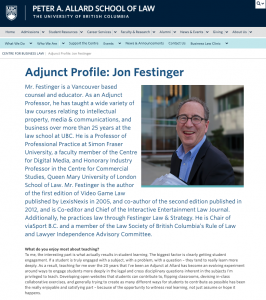 2. Presentation to the 2017 Annual Meeting of the Association of Canadian Legal Education Directors on “Acceleration to Authenticity: Emerging Trends in Online Legal Education” with Will Engle (UBC CTLT), September 7, 2017, Vancouver B.C. 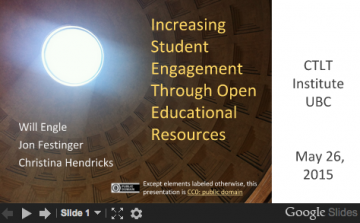 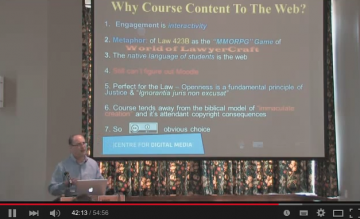 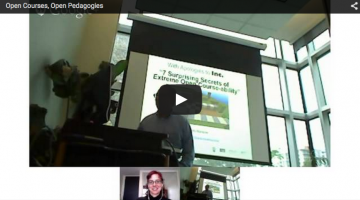 1. Panelist at “Becoming a Trusted Advisor: How to Build your Business Toolkit” hosted by the BC Chapter of the Association of Corporate Counsel and the firm of Stikeman Elliott, where the tools and best practices used by in-house counsel were discussed. The discussion considered both operational and strategic business skills from three perspectives: in-house counsel, external counsel, and c-suite executives. 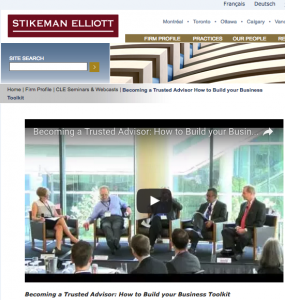 3. Sadovnick Partners is a leading talent search firm based in Los Angeles California. They conduct an interview series which is accessible through their website (http://www.sadovnickpartners.com). Below is a two part video interview, each section being approximately 16 minutes long that largely focuses on media lawyering. 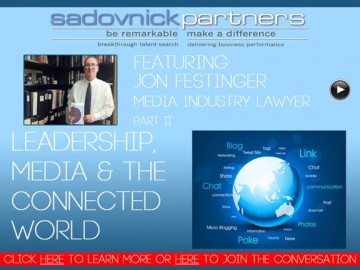 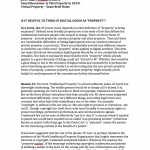 It  was truly a great honour to be profiled as part of “Team Open” by Creative Commons in December 2014. There are many reasons why, but most obviously because it has everything to do with the collaborative efforts around modeling the Video Game Law course in an open way. I understand that my inclusion relates almost entirely to initiatives which are due to the contributions and support of so very many students, guest speakers, colleagues, staff and administration at both the Allard School of Law, UBC and  at the Centre for Digital Media, as well as the unflinching efforts of the UBC Centre for Teaching, Learning & Technology. For more information about the open pedagogic design of the course click on: http://videogame.law.ubc.ca/about-2/communityparticipate/

Finally it is impossible not to be mindful of the incredible contributions to world made Creative Commons as an organization and by its founders including Professor Lawrence Lessig and Aaron Swartz.  The vision and focus of the rest of Team Open is a humbling reminder of both what is possible and what is left to be done.  To read the Team Open article click on the image below (and don’t forget to donate to Creative Commons if you are able). 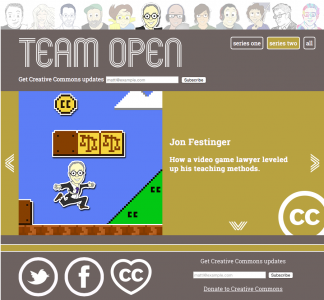 While on the theme of “open” here is a YouTube video and related article where I get to share my views on the subject. Both were skilfully put together by the UBC Centre for Teaching, Learning and Technology. 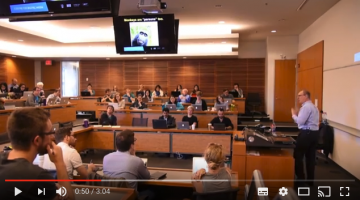 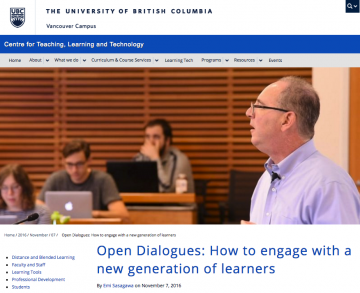 As far as milestones for the course go, being covered by a legitimate video game website also ranks right up there. Most important my wife Corinne liked it and thought it had me down.  Thanks to Justin Gifford for being entirely too kind. Apologies in advance to the entire Commonwealth of Australia…

Click on image below to get to the article. 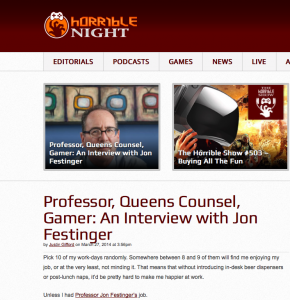 For background about the origins of Video Game Law as both a book and course, you can find that story on this Podcast by clicking on the image). 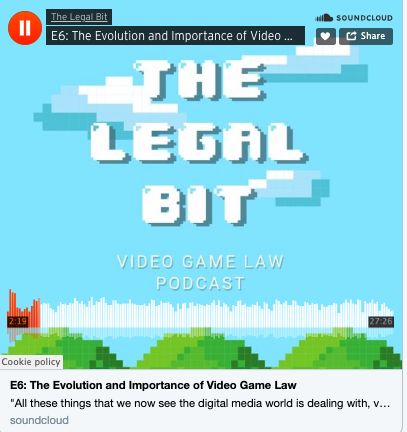 Also in the category of making me look and sound much too good comes this interview with the new website BasedGamer which originates here in Vancouver. 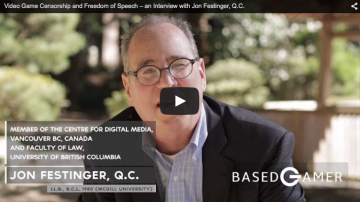 Not to mention this cool video produced VR Chat about our Project Oculus experiment during the 2014 edition of Video Game Law.

Was also part of the Canadian Lawyer cover story for October 2014 “The Next Frontier: Global Trends And Technology Are Driving The Evolution Of Law”. Click on the image below to get to the article. 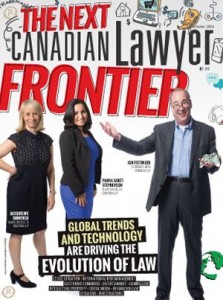 Wrote a short article on “Why Video Game Law Is Important” which landed me on the cover of the February 2015 issue of BarTalk, the monthly publication of the Canadian Bar Association, B.C. Branch. Click on the image below to get to the issue. 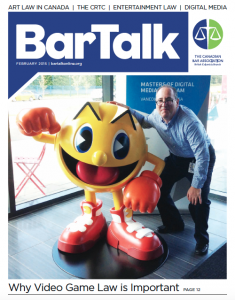 Appeared on the cover of the February 2015 issue of Lexpert magazine and in an article on sports law. Click on the image below to get to the article. 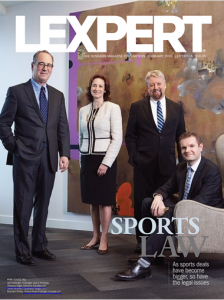 Finally, and at least in part because if there was one language I always wanted to learn it was Italian, here is a short piece which I won’t understand until I finally act on my original intention to learn that language. 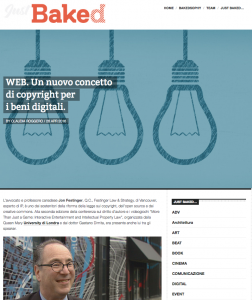